skip to main | skip to sidebar
Memento Stones is a blog dedicated to the art and iconography of gravestone carving. As an artist, designer, autodidact and lifelong taphophile, it is my personal mission to spread the word about inspired memorial art with an emphasis on - but not entirely limited to - regional stone carvings produced prior to the Industrial Revolution. Please read on and enjoy the images. I hope you will find some inspiration!

THE PASSAGE OF TIME & THE DEATH'S HEAD 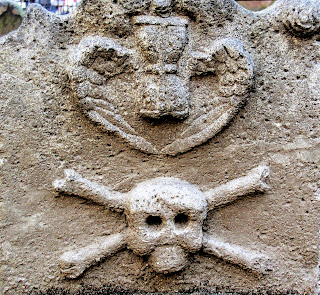 I was thinking that I would focus on hourglasses this week-objects representative of the passage of time-then I revisited the Richard Churcher stone in Trinity Churchyard in lower Manhattan on Sunday. This weighty stone, carved to commemorate a five year old boy in 1681, displays text on one side and a high relief carving on the other. Two sided headstones are common in the Pennsylvania German tradition, but I rarely seen in New England and coastal New York. I really like this stone - solid, direct and to the point. It features both a winged hourglass to represent fleeting time and an obvious skull and cross bones death’s head. So I thought I would address both time pieces and death’s heads today since, as with so much memorial iconography of the period, these symbols often find their way into compositions on the same stone.

Some other stones which include both icons are: the 1769 stone erected for Thomas Webb in the Granary Cemetery in Boston. Here a large traditional skull & bones sits atop a tiny hourglass – obviously death has the upper hand! Also, an early, primitive table top* stone in Perth Amboy, New Jersey and my personal favorite from Woodbridge, NJ – an angled skull and bones above an hourglass surrounded by what is likely stylized vegetation, but which is evocative of the flames of Hell!

* table top stones are vertical stone slabs set on legs or a box foundation, as opposed to upright headstones. 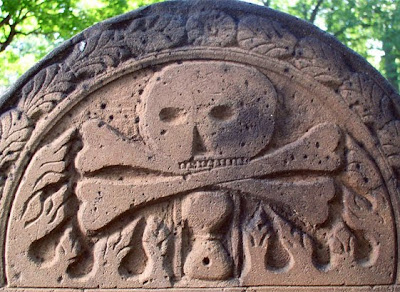 I also like when individual icons are singled out as design elements as in this stone from the Connecticut Farms burial ground in Union, NJ.

The skull and crossed bones is a “memento mori” symbol found on grave markers throughout the world and it appears on colonial gravestones from the earliest days. Later the development of the winged skull version of the death’s head became a dominant design motif and lead to the stunning and diverse imagery of the “soul effigy” (to be discussed in future entries). Here are a few examples from Pomfret, South Windsor and Fairfield, Connecticut and Qunicy, Massachusetts. 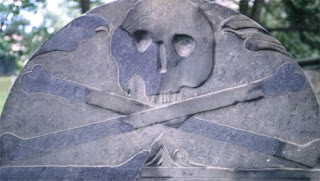 Two more from the old Dutch burial ground, relocated to Greenwood Cemetery in Brooklyn, NY and a damaged stone with sun from Trinity Churchyard, NYC. I like the way, the "eyelashes" mimic the sun's rays. 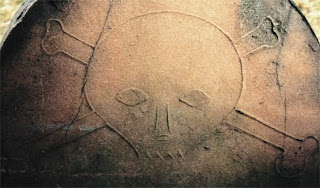 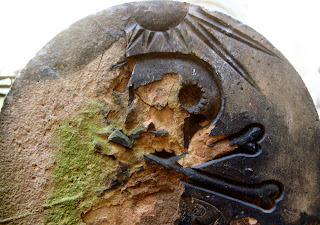 An early slate stone in The King’s Chapel burial ground in Boston features a tympanum design with skull, crossed bones and either feathers or what are known as darts of death. They cross behind the skull in an elegant variation of a winged death’s head. The Elizabeth Tillson stone from Plymouth, MA is a later and much more stylized soul effigy. The crossed bones are still present above an abstracted skull with a variant of a period wig or hairstyle and graceful wings which appear to sprout from the ears of the effigy. 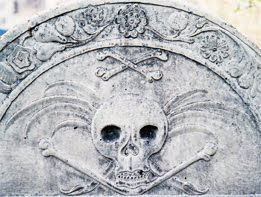 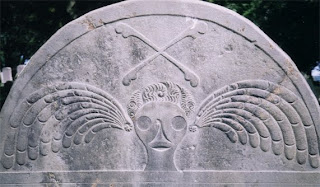 The following are some examples of winged death’s heads in combination with hourglasses from: Hampton, New Hampshire, Quincy, MA and Whitehall cemetery, Mystic, CT. 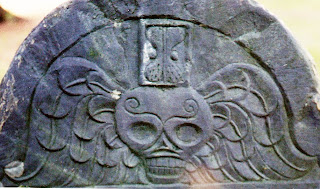 A familiar memento mori icon and element found in Dutch Vanitas still life paintings, the hourglass is the quintessential image of the passage of time. Out lives are like sands through the hourglass. The addition of wings on period gravestones emphasizes flight – as in “time flies”.

This is the beautiful Paul Simons stone, circa 1696 from the Granary cemetery, Boston. The time piece takes flight above the mortal bones flanked by stylized vegetation. 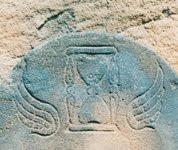 A small winged hourglass graces a footstone in East Hartford, CT. Many colonial era gravesites were marked by a large headstone and accompanying smaller footstone to create a configuration somewhat like a bed. 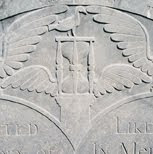 The Robert and Rebecha Montgomery stone from East Derry, NH depicts two soul effigies. In between them, mounted on a pedestal sits a winged hourglass topped by a bird, above that the words, “our glass is run”- a plethora of mortality symbolism.


My last two examples this week are late eighteenth century brown sandstone markers from north central Connecticut. Toward the end of the colonial period a"formulization" of design was taking place among stone carvers. As with any formulaic work, the end result can feel either elegant or uninspired, depending on the piece or your point of view. In one carving the wings are transformed into a swirling decorative element while in the other they are completely supplanted by graphic diamond patterns. 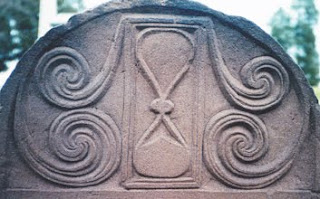 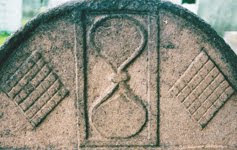 The gravestone enthusiast community is vital and active with numerous online sites and resources. Below are a few selected sites to introduce you to organizations, photo archives and other networking opportunities.